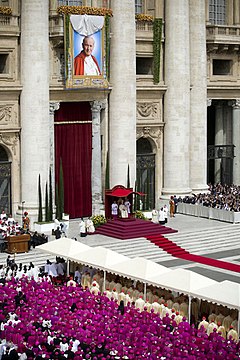 Divine Mercy Sunday, May 1, 2011, at the Vatican included the beatification of Pope John Paul II for which over a million pilgrims went to Rome.[1][2]

Divine Mercy Sunday (also known as the Feast of the Divine Mercy) is celebrated on the Sunday after Easter, the Octave Day of Easter. The feast day is observed by Roman Catholic as well as some Anglicans.[3] It is originally based on the Catholic devotion to the Divine Mercy that Saint Faustina Kowalska reported as part of her encounter with Jesus, and is associated with special promises from Jesus and indulgences issued by the Church.

The feast of Divine Mercy, as recorded in the diary of Saint Faustina, receives from Jesus Himself the biggest promises of grace related to the Devotion of Divine Mercy. In specific, Jesus said that a person who goes to sacramental confession (the confession may take place some days before) and receives holy communion on that day, shall obtain the total forgiveness of all sins and punishment. That means each person would go immediately after death to heaven without suffering in purgatory (or hell). Additionally, the Roman Catholic Church grants a plenary indulgence (observing the usual rules) with the recitation of some simple prayers.

Devotion to the Divine Mercy

Faustina Kowalska, a Polish nun reported visions and visitations from Jesus and conversations with Him. He asked her to paint the vision of His Merciful Divinity being poured from His sacred heart and specifically asked for a feast of Divine Mercy to be established on the first Sunday after Easter so mankind would take refuge in Him:[7][8]

I want the image solemnly blessed on the first Sunday after Easter, and I want it to be venerated publicly so that every soul may know about it.

Let all mankind recognize My unfathomable mercy. It is a sign for the end times; after it will come the day of justice.

Souls perish in spite of My bitter Passion. I am giving them the last hope of salvation; that is, the Feast of My Mercy. If they will not adore My mercy, they will perish for all eternity… tell souls about this great mercy of Mine, because the awful day, the day of My justice, is near.

Sunday, April 28, 1935. Low Sunday; that is, the Feast of The Divine Mercy, the conclusion of the Jubilee of Redemption. When we went to take part in the celebrations, my heart leapt with joy that the two solemnities were so closely united.

This Feast emerged from the very depths of My mercy, and it is confirmed in the vast depths of my tender mercies. Every soul believing and trusting in My mercy will obtain it.

Yes, the first Sunday after Easter is the Feast of Mercy, but there must also be deeds of mercy, which are to arise out of love for Me. You are to show mercy to our neighbors always and everywhere. You must not shrink from this or try to absolve yourself from it.

In several entries in her diary, Faustina recorded promises of Grace and Mercy associated to the Feast of Divine Mercy on Mercy Sunday. Jesus Stated:[9]

Ask of my faithful servant [a priest] that, on this day, he tell the whole world of My great mercy; that whoever approaches the Fountain of Life on this day will be granted complete forgiveness of sins and punishment. Mankind will not have peace until it turns with trust to My mercy.

I desire that the Feast of Mercy be a refuge and shelter for all souls, and especially for poor sinners. On that day, the very depths of My tender mercy are open. I pour out a whole ocean of graces upon those souls who approach the fount of My mercy. The soul that will go to Confession and receive Holy Communion shall obtain the complete forgiveness of sins and punishment. On that day all the divine floodgates through which grace flow are opened. Let no soul fear to draw near to Me, even though its sins be as scarlet.

I want to grant a complete pardon to the souls that will go to Confession and receive Holy Communion on the Feast of My Mercy.

On March 23, 1937, Faustina wrote in her diary (Notebook III, item 1044) that she had a vision that the feast of Divine Mercy would be celebrated in her local chapel, and would be attended by large crowds, and that the same celebration would be held in Rome attended by the Pope.[4][6] She wrote: “The crowd was so enormous that the eye could not take it all in. Everyone was participating in the celebrations.”[4]

Divine Mercy Sunday is also the day after the culmination of the novena of the Chaplet of Divine Mercy.[10][11] Faustina wrote Jesus instructed her that the Feast of Mercy (the Sunday after Easter) be preceded by a Divine Mercy Novena which would begin on Good Friday.[10]

The first Mass during which the Divine Mercy imagewas displayed was on April 28, 1935, the first Sunday after Easter (the Feast of Divine Mercy) and was attended by Sr. Faustina. (Diary of St. Faustina, item 420).[12] April 28, 1935 was also the celebration of the end of the Jubilee of the Redemption by Pope Pius XI.[12][13] Father Michael Sopocko (Faustina’s confessor) celebrated the Mass that Sunday and obtained permission to place the image within the Gate of Dawn church in Vilnius during the Mass.[12][14] 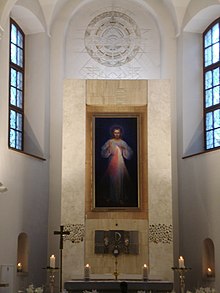 The devotion was actively promoted by Pope John Paul II. On April 30, 2000, the Canonization of Faustyna Kowalska took place and the Sunday after Easter was officially designated as the Sunday of the Divine Mercy (Dominica II Paschae seu de divina misericordia) in the General Roman Calendar.[15][16]On April 22, 2001, which was one year after establishing Divine Mercy Sunday, Pope John Paul II re-emphasized its message in the resurrectioncontext of Easter:

Jesus said to St. Faustyna one day: “Humanity will never find peace until it turns with trust to Divine Mercy”. Divine Mercy! This is the Easter gift that the Church receives from the risen Christ and offers to humanity.[17]

The devotion to Divine Mercy Sunday grew rapidly after its designation by Pope John Paul II and is now widely celebrated by Catholics.[18] The Divine Mercy image is often carried in processions on Divine Mercy Sunday, and is placed in a location in the church so that it can be venerated by those who attended the Mass.[18]

Heavenly Father and God of Mercy, We no longer look for Jesus among the dead, for He is alive and has become the Lord of Life.[19]

This opening prayer refers to Divine Mercy as the key element in the plan of God for salvation and emphasizes the belief that it was through mercy that God gave his only son for the redemption of mankind, after the fall of Adam.[19]

In June 2002, John Paul II granted indulgences to Catholics who recite specific prayers on that day, which were then formally decreed by the Apostolic Penitentiary.[5] The priests are also ordered in that day to lead the prayers in honor of Divine Mercy, inform the parishioners about the Divine Mercy, and hear confessions.[5]

This Plenary Indulgence is obtained by observing the usual dispositions that are on place for the granting of this grace through the Intercession of the Catholic Church, that is: Sacramental Confession (the confession may take place some days before), Holy Communion, to pray for the intentions of the pope (an Our Father and Hail Mary is minimum requirement), when the faithful detached from any sin, even venial, either:

A display at the Altar on Divine Mercy Sunday at St Pancras Church, Ipswich

…in both cases, adding a devout prayer to the Merciful Lord (i.e. “Merciful Jesus, I trust in You.”).

Additionally, for the faithful who, for a justified reason beyond their control, are unable to go to church or chapel, may obtain forgiveness with the recitation of one Our Father and Creed before a devout image of Jesus adding “Merciful Jesus, I Trust in you.” They will receive the plenary Indulgence that day with the condition of fulfilling the usual sacramental requirements at a later time.

Even if the above is impossible to do, the Indulgence is granted if with spiritual intention they unite themselves to the ones carrying on the prescribed practices with the intention of fulfilling the requirements as soon as it is possible.