Ash Wednesday marks the beginning of the 46-day period of Lent. They’re two of the most important liturgical events for Christians and help prepare them for Easter.

On Ash Wednesday, you may encounter Christians, especially Catholics, wearing a smudge of ashes on their foreheads.

That could be a bit startling, unless you know the meaning behind this religious practice.

Here is what you should know about Ash Wednesday and the celebration of Lent.

What is Ash Wednesday?

Ash Wednesday — officially known as the Day of Ashes — is a day of repentance, when Christians confess their sins and profess their devotion to God.

During a Mass, a priest places the ashes on a worshiper’s forehead in the shape of a cross. The ceremony, which also can be performed by a minister or pastor, is meant to show that a person belongs to Jesus Christ, and it also represents a person’s grief and mourning for their sins — the same sins that Christians believe Jesus Christ gave his life for when he died on the cross.

Ash Wednesday is important because it marks the start of the Lenten period leading up to Easter, when Christians believe Jesus was resurrected.

The ashes symbolize both death and repentance. During this period, Christians show repentance and mourning for their sins, because they believe Christ died for them.

When the priest applies the cross of ashes, he says to the worshiper: ““Remember that you are dust, and to dust you shall return.” He also may say “Repent and believe in the Gospel.”

It is not required that a worshiper wear the ashes for the rest of the day, although many Christians choose to do so. However, dining out or doing non-essential shopping are considered inappropriate on Ash Wednesday.

Where do the ashes come from?

Traditionally, ashes used on Ash Wednesday are gathered up after palms from the previous year’s Palm Sunday are burned. They are then blessed before being used in the ceremony.

Palms are used on Palm Sunday in many Christian churches to symbolize Jesus’ triumphant entry into Jerusalem on the Sunday before his crucifixion. Residents of Jerusalem are said to have waved palm fronds to celebrate his arrival.

No. Catholics are not supposed to eat meat on Ash Wednesday. They also are expected to give up meat on Fridays during Lent.

Catholics also are expected to fast on Ash Wednesday. Fasting means consuming only one full meal a day; two smaller meals that don’t together add up to a full meal also are allowed.

Children and the elderly are exempt from the fasting requirement on Ash Wednesday and during Lent.

Parishioners are anointed with ashes

Is Ash Wednesday based on a pagan festival?

No. Early Christians in Rome were sprinkled with ashes during Lent, but the Ash Wednesday practice of placing ashes on the forehead of Christians didn’t begin until the Middle Ages. 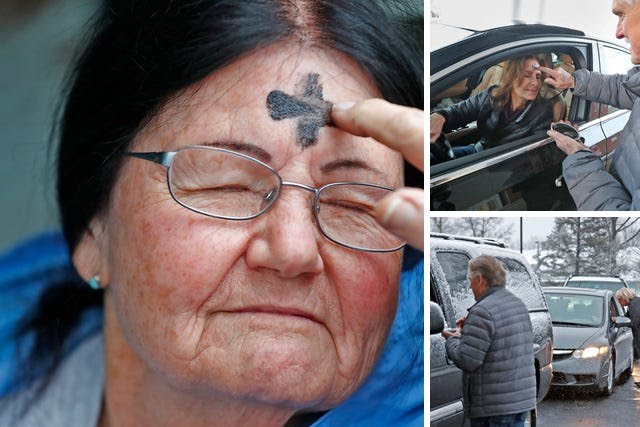 Ash Wednesday is one of the most important dates on the Christian calendar, because it marks the start of Lent.

Lent is a six-week period of fasting or self-sacrifice, prayer and almsgiving observed by Christians each year to prepare for the celebration of Easter, when they believe Christ rose from the dead to sit at the right hand of God, his father.

Lent is celebrated over 46 days. It includes 40 days of fasting and six Sundays, on which fasting is not practiced.

The 40-day period has a special significance in the Old and New Testaments. For instance, Moses spent 40 days and nights with God on Mount Sinai in preparation to receive the Ten Commandments. Jesus also is depicted as being led into the wilderness to be tempted by the devil for 40 days.