You are here: Home / Historical Sites

Kingstone Well located in the townland of Toomour. Stories have been handed down from generation to generation of people coming to pray at this well, dedicated to Christ the King. Close to the Holy Well an area can be seen where people in times gone by, would have walked in circles around a type of mound in the field, reciting their prayers. This well is synonimis with the Holy Rosary.  The beautiful statue of Our Lady was placed at this Holy well in 2011, carried in and fixed to its present location by a local man Tom Ward. Tom sadly passed away only a short few days after carrying this beautiful Statue to its present location at the Holy Well. One week to the day having carried the Statue to this Holy Well, Toms remains were before the alter in Keash church. We remember Tom in our prayers each time we visit this beautiful Holy Well. We thank Fr. Jim Finan, the members of the FAS scheme (who carried out the works) and indeed the Henry family Greenane for facilitating access. We thank the people who quietly maintain the well in its present beauty.
Fr. Jim Finan, Parish Priest of Keash at the time, led the Holy Rosary on one occasion annually from 2011 to 2013.
In 2018, Fr. Gabriel Murphy PP of Keash, again led the people in reciting the Rosary at this beautiful well.
In 2019, for the four Sundays of May, Fr. Gabriel assisted by William Henry organised a pilgrimage walk from the Grotto at St. Kevin’s church to the Holy Well and back. The walk started at 7.30am each morning.
In 2020 and 2021, the people of the parish ensured the continuation of this pilgrimage walk by individually doing the pilgrimage walk (as a result of the coronavirus). Thank you to Michael Cosgrove who regularly maintained the Holy Well throughout this period of time.
2022
After two years of covid, a Rosary was organised at Kingstone Holy Well, by John Cryan and Fr. Gabriel on Saturday the 14th of May. The weather was wonderful and very much enjoyed by all in attendance. Thank you to Pat Lynch for carrying out maintenance and tidy up work in advance of the Rosary. 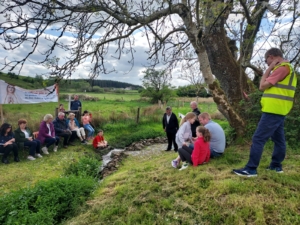 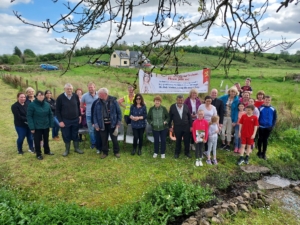 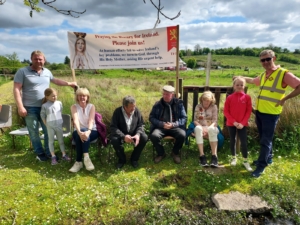 Toomour, which was formerly the name of the old parish of Keash, is now reserved as a townland name only.
This small church in ruins was part of an Abbey here in Toomour. What remains here are the east Gables and part of the North and South Walls. It is said that in the 6th Century Bishop Lughaidh ordained the famous Priest, St. Kevin of Glendalough , (Patron Saint of the parish) here at Toomour Abbey in approximately 560. It is also thought that the church itself was built by St. Patrick and it derives its name from the Holy Well nearby, Toomour (Tuaim Fobhair) signifying the hollow of the spring. The present name of the spring is Kingstone referring to the Kings or Chiefs buried at Toomour Abbey.
On the west wall there was laid a range of seventeen rounded sea stones marked with several incised lines. This flag was the Altar table and under it a stone stood bearing an incised cross. Six similar incised crosses , one a piece for the kings appeared on the circular flag that covers the grave, each being 5 inches by 5 inches.  In this covering flag there are two small depressions, which as the legend goes were made by the knees of the saint of the place by his constant prayers at the altar.
Human bones were found beneath the covering flag, which apparently have laid there for upwards of 900 years.
This ancient Christian site was chosen as the burial place of the Kings and Chieftains who fell in the battle of Ceis Corrainn in 971 and it seems that its the second largest royal cemetery in Europe.
There are no records of when Toomour was last used.
In August 2003, the then County Manager Hubert Kearns unveiled an information plaque at Toomour old church. Fr. Jim Finan blessed the plaque. These works at the time were carried out under the guidance of the Templevanny Lake District Development Association.
Many thanks to all involved at the time to include the Cryan Family for giving the piece of land to ensure access to the road, Councillor Gerry Murray RIP, Jim Cawley (the Contractor who erected the fencing), Brother Connolly, Sean Coleman, Fr. Jim Finan and many many more.

It would be greatly appreciated if anyone with details about the Church in Greenane, could forward such details to us.

This is a very historical parish, being
the birthplace of Ireland’s first Árd
Rí, Cormac Mác Art, and the setting
for the epic tales of the Fianna
related in legend and story. As we
know from archaeological research
people have lived here for thousands
of years, in the forts and raths that
are so numerous all over the area.
They worshipped old gods and built
dolmens and cairns to mark the burial
places of their dead. Carrowkeel is
only over the hill from Cillín, where
cremations and inhumations took
place. The advent of Christianity
with the coming of St Patrick had a
profound influence on society. He
did not change the old pagan ways of
worship but gave them a new Christian
meaning. Soon monasteries spread all
over the country; these were centres
of religion and education and catered
for the spiritual needs of the people.
There were two main monastic sites in
this parish at the time: Drumrath and
Toomour. Greenan was a later offshoot
of some type, perhaps associated with
Toomour.
Templevanny and Cillín are of
a much later date, being granges
or outlying farms belonging to the
Cistercian monks in Boyle Abbey,
which was founded in 1161. Cillín is
situated in the old parish of Toomour,
and a bullan stone and some metal
slag found here helps to find a date
for its foundation. The name Cillín
suggests that there was a graveyard
here where children who died without
baptism were buried. On the 1838
Ordnance Survey map a mill with a
kiln and fishery is marked to the west
of the church. The church and cells
for the monks were established here
to enable the monks who worked the
lands – then known as Abbey Lands –
to celebrate the divine service.
The Cistercians were granted 50,000
acres of land west of the Shannon
and there is a reference to ‘Cluain
Cath’ [Battlefield] as being part of
this grant of land. These lands were
granted to the Cistercians to repay
them for ministering to the spiritual
needs of the people. This site was
probably circular in shape. It would
have been surrounded by a large
fence for protection, and the church
itself was built of stone. The monks
who lived there had their own cells
around the church. They were largely
self-sufficient, living by the labour
of their own hands. Sheep pigs and
cattle provided foodstuffs, clothing,
footwear, tallow for candles, and
vellum for writing. Wheat, flax, oats,
barley, vegetables and herbs were
grown. Bee-keeping provided honey
and oxen and horses were used on the
farm.
These monks looked after the
spiritual needs of the local people. The
Abbot was the head of the monastery,
and the almoner dispensed alms to
the poor. The daily life of the monks
centred around the ‘Book of Hours’
which was the main prayer book. It
was divided into eight sections, or
‘hours’, that were meant to be read at
specific times of the day. Each section
contained hymns, psalms and other
readings to help the monks secure
salvation. Each day was divided into
eight sections or sacred offices during
which time the recitation of the Divine
Office took place. The monks fasted
daily until evening, and their day was
spent almost in complete silence with
a great deal of solitude. They saw their
life as a journey to God and they fixed
their eyes on the destination rather than
the passing pleasures of this world.
However, many of the monks failed
to live up to this austere discipline
and opted out. The rule of life for the
Cistercians was very strict and the
main reason they had been invited
here was to reform the Church, which
both morally and organizationally
had fallen out of line with the rest of
Europe. There was spiritual and moral
laxity, the sacraments were neglected
and corruption was rife, so it was
obvious that reform was necessary as
the era of Ireland’s Golden age had
long ended. At the synod of Kells in
1152 the present Diocesan boundaries
were agreed on. The lay lords of
the time made most of the clerical
appointments. They administered the
Abbey Lands mainly for their own
benefit and often without regard to the
interests of religion. If an unpopular
Abbot was chosen by the Pope, the
Abbey Lands would be seized by
the supporters of the disappointed
candidate. Therefore the wealthy
monasteries had left the country
without even the bones of a clerical
organisation based on a secular
priesthood.
Tadgh McDonagh was steward of
these Abbey Lands here and he and
his son built a residence, a church
and guardhouse that became known
as Tampall a Mhanaigh Templevanny
(Church of the Monks). They were
not welcome here and the local people
resented the heavier dues and task
work which Tadgh and Boyle Abbey
demanded. Because of his flowing
red hair the locals called him Manach
Rua, and he became supreme arbiter in
all matters lay and spiritual. His word
was law, and for the slightest offence
one could be imprisoned in his prison
house at Templevanny or hanged
at Cnocan na Cruaiche (Hill of the
Gallows) Knocknacroy in Keash. He
is buried in Templevanny Churchyard
under the long stone.
In 1586 these lands were granted
to Patrick Cusack and lay abbots
ceased to be appointed. The worldly
minded were weeded out of the ranks
of the priesthood, the monasteries and
their lands were confiscated during
the reign of the Tudors, and Cillín
like other monastic sites passed into
oblivion. These venerable ruins are
relics and memorials of our past and
out of this hallowed place of prayer,
hymns and the celebration of the
Eucharist was heard and celebrated
hundreds of years ago.
This article is from a talk given by
John Higgins, retired Principal of
Culfadda National School, at Cillin
in June 2012 as Mass was celebrated
in preparation for the Eucharist
Congress.

The parish priest Fr Gabriel Murphy led a pilgrimage to the summit of Keash Hill on Sunday September 14th, 2014. He celebrated Mass for the very large congregation at 1pm at the Cross which had been erected in the year 2000 to replace the original Cross which was erected in 1950. Pilgrims of all ages from the Parish and surrounding areas participated and all carried a small pebble as a symbol of the gift of faith they have received. Everyone found the pilgrimage spiritually rewarding and fulfilling.

It would be greatly appreciated that anyone with further information about the cross on Keash hill (ie old cross or new cross) forward that information to us for publication on our website.