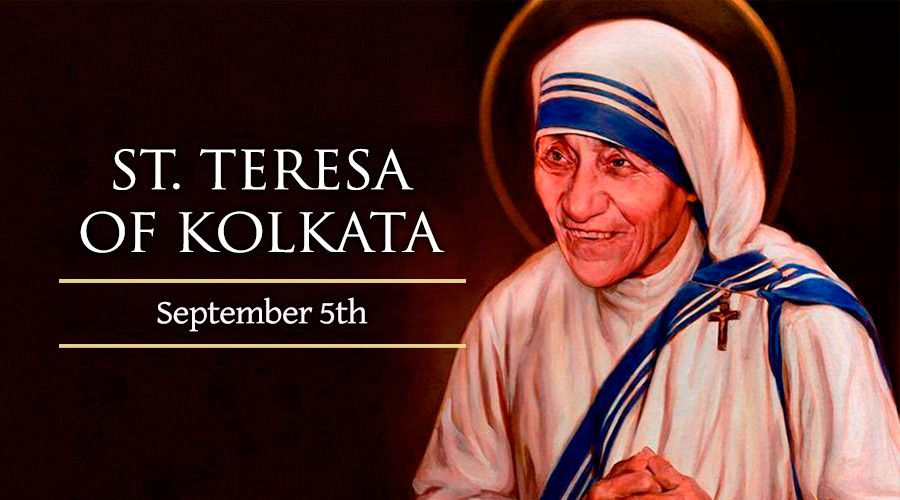 The Church celebrates on Septermber 5 the feast of Mother Teresa, a universal symbol of God’s merciful and preferential love for the poor and forgotten.Mother Teresa was born Agnes Gonxha Bojaxhiu on August 26, 1910, in Skopje, Macedonia, the youngest of three children. She attended a youth group called Sodality, run by a Jesuit priest at her parish, and her involvement opened her to the call of service as a missionary nun.

She joined the Sisters of Loretto at age 17 and was sent to Calcutta where she taught at a high school. She contracted Tuberculosis and was sent to rest in Darjeeling. It was on the train to Darjeeling that she received her calling – what she called “an order” from God to leave the convent and work and live among the poor.  At this point she did not know that she was to found an order of nuns, or even exactly where she was to serve. “I knew where I belonged, but I did not know how to get there,” she said once, recalling the moment on the train.

Confirmation of the calling came when the Vatican granted her permission to leave the Sisters of Loretto and fulfill her calling under the Archbshop of Calcutta. She started working in the slums, teaching poor children, and treating the sick in their homes. She was joined a year later by some of her former students and together they took in men, women, and children who were dying in the gutters along the streets and cared for them.

In 1950 the Missionaries of Charity were born as a congregation of the Diocese of Calcutta and in 1952 the government granted them a house from which to continue their service among Calcutta’s forgotten.

The congregation very quickly grew from a single house for the dying and unwanted to nearly 500 around the world.  Mother Teresa set up homes for AIDS sufferers, for prostitutes, for battered women, and orphanages for poor children.

She often said that the poorest of the poor were those who had no one to care for them and no one who knew them. And she often remarked with sadness and desolation of milliions of souls in the developed world whose spiritual poverty and loneliness was such an immense cause of suffering.

She was a fierce defender of the unborn saying: “If you hear of some woman who does not want to keep her child and wants to have an abortion, try to persuade her to bring him to me. I will love that child, seeing in him the sign of God’s love.”

Mother Teresa once said, “A sacrifice to be real must cost, must hurt, must empty ourselves. The fruit of silence is prayer, the fruit of prayer is faith, the fruit of faith is love, the fruit of love is service, the fruit of service is peace.” She also said, “give yourself fully to God. He will use you to accomplish great things on the condition that you believe much more in His love than in your own weakness.”

Saint Teresa of Calcutta, you allowed the thirsting love of Jesus on the Cross to become a living flame within you, and so became the light of His love to all. Obtain from the Heart of Jesus (here make your request). Teach me to allow Jesus to penetrate and possess my whole being so completely that my life, too, may radiate His light and love to others. Amen.
Immaculate Heart of Mary, Cause of Our Joy, pray for me.
Saint Teresa of Calcutta, pray for me.

Saint Teresa of Calcutta, longing to love Jesus as He had never been loved before, you gave yourself entirely to Him, refusing Him nothing. In union with the Immaculate Heart of Mary, you accepted His call to satiate His infinite thirst for love and souls and become a carrier of His love to the poorest of the poor. With loving trust and total surrender you fulfilled His will, witnessing to the joy of belonging totally to Him. You became so intimately united to Jesus your crucified Spouse that He deigned to share with you the agony of His Heart as He hung upon the Cross.

Saint Teresa, you promised to continuously bring the light of love to those on earth; pray for us that we also may long to satiate the burning thirst of Jesus by loving Him ardently, sharing in His sufferings joyfully, and serving Him wholeheartedly in our brothers and sisters, especially those most unloved and unwanted.

Jesus, you made Saint Teresa an inspiring example of firm faith and burning charity, an extraordinary witness to the way of spiritual childhood, and a great and esteemed teacher of the value and dignity of every human life.

Hear the requests of all those who seek her intercession, especially the petition I now implore…

(mention here the favor you wish to pray for).

May we follow her example in heeding Your cry of thirst from the Cross and joyfully loving You in the distressing disguise of the poorest of the poor, especially those most unloved and unwanted.

We ask this in Your name and through the intercession of Mary, Your Mother and the Mother of us all.

Saint Teresa of Calcutta, you allowed the thirsting love of Jesus on the Cross

to become a living flame within you, and so became the light of His love to all.

Obtain from the Heart of Jesus …

completely that my life, too, may radiate His light and love to others.

Saint Teresa of Calcutta, Jesus called you to bring the light of His love to those who live in darkness. By tender, loving care for the poorest and the neediest, you became the sign of God’s presence, His love and compassion in the midst of suffering and pain.

Following your example, help us to recognize the face of Jesus in our suffering brothers and sisters and to serve Him with humility and joy. Teach us to be carriers of God’s tender love and mercy and so bear witness that God still loves the world through each one of us.

Keaveny family return to Keash (a number of years ago)

Our Lady of Sorrows – Novena (for September)
Scroll to top