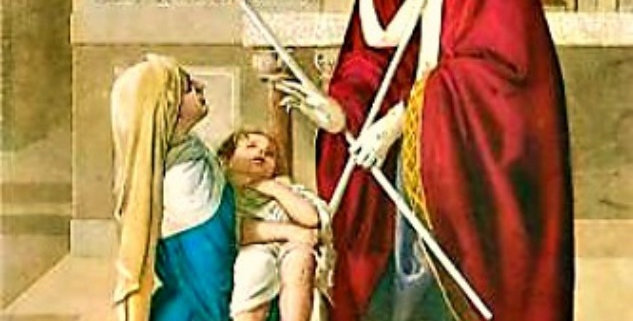 February 3rd is the Feast of Saint Blaise. On this date the traditional Saint Blaise blessing of throats is offered.
Bishop Blaise was martyred in his episcopal city of Sebastea, Armenia, in 316. The legendary Acts of St. Blaise were
written 400 years later. According to them Blaise was a good bishop, working hard to encourage the spiritual and
physical health of his people. Although the Edict of Toleration (311), granting freedom of worship in the Roman
Empire, was already five years old, persecution still raged in Armenia. Blaise was apparently forced to flee to the back
country. There he lived as a hermit in solitude and prayer, but he made friends with the wild animals. One day a group
of hunters seeking wild animals for the amphitheatre stumbled upon Blaise’s cave. They were first surprised and then
frightened. The bishop was kneeling in prayer surrounded by patiently waiting wolves, lions and bears. The legend has
it that as the hunters hauled Blaise off to prison, a mother came with her young son who had a fish bone lodged in his
throat. At Blaise’s command the child was able to cough up the bone. Agricolaus, governor of Cappadocia, tried to
persuade Blaise to sacrifice to pagan idols. Blaise refused and consequently died a martyr’s death. 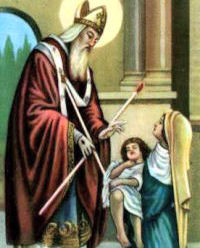