Solemnity of All Saints

I, John, saw another angel come up from the East,
holding the seal of the living God.
He cried out in a loud voice to the four angels
who were given power to damage the land and the sea,
“Do not damage the land or the sea or the trees
until we put the seal on the foreheads of the servants of our God.”
I heard the number of those who had been marked with the seal,
one hundred and forty-four thousand marked
from every tribe of the children of Israel.

After this I had a vision of a great multitude,
which no one could count,
from every nation, race, people, and tongue.
They stood before the throne and before the Lamb,
wearing white robes and holding palm branches in their hands.
They cried out in a loud voice:

“Salvation comes from our God, who is seated on the throne,
and from the Lamb.”

All the angels stood around the throne
and around the elders and the four living creatures.
They prostrated themselves before the throne,
worshiped God, and exclaimed:

“Amen.  Blessing and glory, wisdom and thanksgiving,
honor, power, and might
be to our God forever and ever.  Amen.”

Then one of the elders spoke up and said to me,
“Who are these wearing white robes, and where did they come from?”
I said to him, “My lord, you are the one who knows.”
He said to me,
“These are the ones who have survived the time of great distress;
they have washed their robes
and made them white in the Blood of the Lamb.”

Beloved:
See what love the Father has bestowed on us
that we may be called the children of God.
Yet so we are.
The reason the world does not know us
is that it did not know him.
Beloved, we are God’s children now;
what we shall be has not yet been revealed.
We do know that when it is revealed we shall be like him,
for we shall see him as he is.
Everyone who has this hope based on him makes himself pure,
as he is pure.

When Jesus saw the crowds, he went up the mountain,
and after he had sat down, his disciples came to him.
He began to teach them, saying:

When Jesus saw the crowds, he went up the mountain, and after he had sat down, his disciples came to him. He began to teach them, saying: “Blessed are the poor in spirit, for theirs is the Kingdom of heaven.” Matthew 5: 1–3 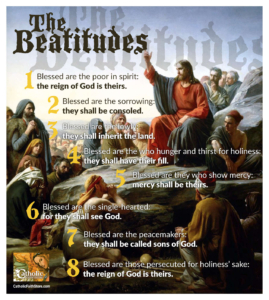 Today we celebrate one of the most glorious solemnities within our Church! Every saint, canonized or not, is honored today. Our Gospel passage lays out the path by which these saints entered Heaven. While on earth, these great men and women lived lives that were poor in spirit, filled with a holy mourning, meekness, a hunger and thirst for righteousness, mercy, peace, purity of heart and even persecution. Each one of these Beatitudes concludes by stating the reward that those who lived these qualities obtains: Heaven, comfort, satisfaction, mercy, seeing God, being children of God and rewards beyond what we can imagine in God’s Kingdom.

The Beatitudes invite us to the heights of holiness. They are not for the faint of heart or for those living a lukewarm spiritual life. These Beatitudes present us with the pinnacle of holy living and challenge us to the core. But every effort put into living these Beatitudes are worth it here on earth and ultimately in Heaven. Let’s look briefly at two of these Beatitudes.

The second Beatitude states that those “who mourn…will be comforted.” This is an interesting Beatitude. Why is it holy to mourn? Simply put, this form of holy mourning means that you not only have a holy sorrow for your own sins but that you have this holy sorrow as you see the many evils within our world. This is crucial today. First, it should be quite obvious that we must have holy sorrow for our own sins. Doing so means your conscience is working. And when your conscience is working, you will be compelled, by this holy sorrow, to acknowledge your offenses against God and work diligently to change. But we must also have a holy sorrow as we see the many evils within our world. Too often today there is a tendency to undermine this Beatitude by presenting universal acceptance of all things as a good. We are told we must not judge, and though that is true when it comes to judging another’s heart, a worldly presentation of this secular “virtue” attempts to lead us to downplay the objective nature of sin. Our secular world tempts us to ignore many objective moral truths by which God guides us into all truth. But as Christians, our first approach must be to despise all that our Lord taught was objectively morally evil. And when we do come face-to-face with immoral lifestyles, the appropriate response must be holy sorrow, not acceptance of grave sin. To mourn over another’s poor choices is a true act of charity toward them.

The fourth Beatitude calls us to “hunger and thirst for righteousness.” This means that we not only have a holy sorrow over our sins and the objective evils of our world, but that we also allow ourselves to be filled with a hunger and thirst for truth and holy living. This drive must become a burning motivation within us to do all we can to further the Kingdom of God everywhere. This Beatitude enables us to overcome indifference, inspiring us to bring about change in the face of all opposition. And this drive is fueled by charity and every other accompanying virtue.

Reflect, today, upon the beautiful truth that you are called to become a saint. And the surest path to sainthood is the Beatitudes. Read them carefully. Meditate upon them and know that they reveal to you how God is calling you to live. If one of these Beatitudes stands out to you, then spend time focusing upon it. Work to internalise these graces, and God will work wonders in your life, one day making this solemnity within our Church a true celebration of your life well lived.

My most holy Lord, You reign now in Heaven and desire that Your glorious Kingdom be firmly established upon earth. Give me the grace I need to seek holiness with all my heart and to especially use Your revelation of the Beatitudes as the path by which I travel. I pray that I will become a true saint in this world and that You will use me to further Your Kingdom now and for eternity. Jesus, I trust in You.

Prayer for All Souls day
Scroll to top