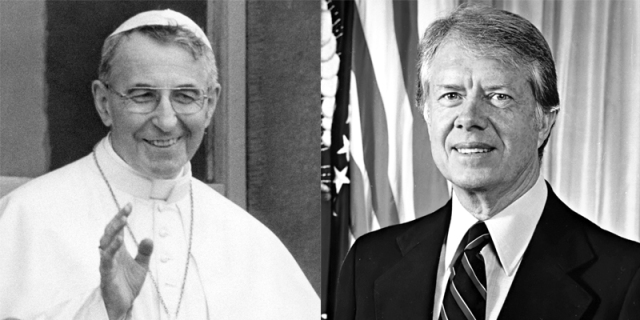 Right at this time 44 years ago, the Church was in the midst of one of the shortest papacies in history: that of Pope John Paul I, who was pope from August 26, 1978, until his sudden death from a heart attack 33 days later, on September 28.

The ongoing research into the life of John Paul I — who was known as “The Smiling Pope” — including the recent discovery of a hitherto unpublished letter to US President Jimmy Carter, written at the time when Carter received at Camp David the Egyptian President Anwar Sadat and Israeli Prime Minister Menachem Begin. The world leaders went on to sign the Camp David Accords on September 17, 1978.

Pope John Paul’s letter encouraged the American head of state to achieve a peace agreement between Israel and Egypt. After two weeks of intense negotiations and the adoption of the peace treaty, Jimmy Carter responded to the pope, assuring him he was “greatly inspired” by his prayers.

Pope Benedict XVI has had a hand in the progress of the cause.

The German Pontiff is an advocate for his predecessor, remembering him as “unforgettable for all of us” in 2005, when he greeted the faithful of the Diocese of Belluno-Feltre who, together with their bishop, Monsignor Giuseppe Andrich, were in Rome “to make a grateful and prayerful remembrance” of John Paul I on the anniversary of his death.

Benedict XVI in fact gave testimony for the beatification cause, it was reported in 2015. This was possible after his retirement, since as pope, he was unable to be a part of the cause which would eventually be his responsibility to approve.

In 2006, Benedict was given a preview of the film Pope Luciani: God’s Smile. He said:

In particular, we have been able to revisit the sweet and gentle figure of a Pontiff who was strong in faith, firm in principles but ever ready with a welcome and a smile. Faithful to tradition and open to renewal, the Servant of God Albino Luciani, as Priest, Bishop and Pope, was unflagging in his pastoral activity, constantly encouraging clergy and lay people alike to pursue in the various fields of the apostolate the one common ideal of holiness. A teacher of truth and a passionate catechist, he reminded all believers with his customary fascinating simplicity of the work and joy of evangelization, emphasizing the beauty of Christian love, the one force that can defeat violence and build a more fraternal humanity. Lastly, I would like to recall his devotion to Our Lady. When he was Patriarch of Venice he wrote: “It is impossible to conceive of our life, the life of the Church, without the Rosary, the Marian feasts, Marian shrines and images of Our Lady”. It is beautiful to accept his invitation and, as he did, to find in humble entrustment to Mary the secret of daily serenity and effective work for peace in the world.

The intercession of John Paul I is credited with a miracle in the life of Giuseppe Denora, who in 1992 was suddenly healed from a malignant stomach tumor after he sought Pope Luciani’s intercession.

Beatification of Pope John Paul I