Blog - Latest News
You are here: Home / Latest News / “being little is a blessing” – Pope Francis 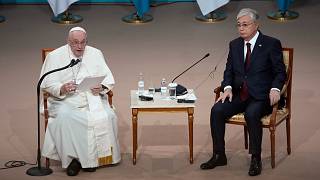 Pope Francis in Our Mother of Perpetual Help Cathedral on Sept. 15, 2022 | Vatican Media Pope Francis with religious sisters in Our Mother of Perpetual Help Cathedral on Sept. 15, 2022 | Vatican Media Pope Francis praying in the Cathedral of Our Lady of Perpetual Help in Nur-Sultan, Kazakhstan. | Rudolf Gehrig / CNA Pope Francis speaking before the icon in the Cathedral of Our Lady of Perpetual in Nur-Sultan, Kazakstan. | Rudolf Gehrig / CNA Speaking to priests, religious sisters, and missionaries living in Kazakhstan, where Catholics make up less than 1% of the population, Pope Francis on Thursday said that God’s power is made manifest when “we acknowledge our littleness.”

“The Gospel says that being little, poor in spirit, is a blessing, a beatitude, and indeed the first of the beatitudes,” Pope Francis said in Nur-Sultan’s Cathedral of Our Lady Of Perpetual Help on Sept. 15.

“There is a hidden grace in being a small Church, a little flock, for instead of showing off our strengths, our numbers, our structures, and other things that are humanly important, we can let ourselves be guided by the Lord and humbly draw close to others,” he said.

Kazakhstan is a majority-Muslim country home to an ethnically diverse minority of Catholics — an estimated 125,000 out of the Central Asian country’s population of 19 million.

The former Soviet country was the site of one of the largest systems of collective labor camps in the Soviet Union, the KarLag. It is estimated that a million political prisoners passed through KarLag to toil in its extensive complex of mines over the decades from 1931 to 1959, including thousands of persecuted Polish, Ukrainian, German, Lithuanian, and Belorussian Catholics.

Pope Francis recalled the “great witness of faith” of Blessed Władysław Bukowiński, a priest who spent more than 10 years in Soviet gulags proclaiming the Gospel to the other prisoners sentenced to forced labor. Bukowiński was beatified in Karaganda, Kazakhstan, in 2016.

“I am told that even before his beatification there were always fresh flowers and a lighted candle on his tomb. This is a confirmation that the people of God can recognize holiness, and a pastor in love with the Gospel,” Pope Francis said.

The pope began his third and final day in Kazakhstan with a private meeting with local Jesuits at the apostolic nunciature before traveling to the cathedral to pray with the local priests and religious from Kazakhstan and other neighboring Central Asian countries.

Musicians played a traditional Kazakh song for Pope Francis when he arrived at the cathedral in a wheelchair. A new icon depicting Mary and the Child Jesus as native Kazakhs was then unveiled above the altar.

Inside the cathedral, the pope listened to testimonies from the rector of the only Catholic seminary in Central Asia, a religious sister, a father of five children, and the wife of a Ukrainian Greek Catholic priest.

Pope Francis commented: “I was struck by a recurring theme in all the testimonies we heard … that in the Church, shaped by the Gospel, we learn to pass from selfishness to unconditional love.”

Some events of interest Newsletter:- 25th September 2022
Scroll to top