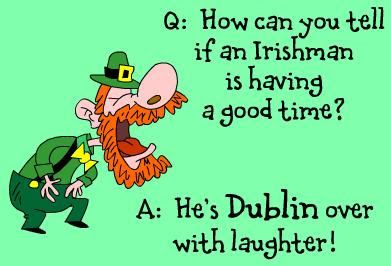 An Irishman is struggling to find a parking space.

“Lord,” he prayed. “I can’t stand this. If you open a space up for me, I swear I’ll give up the Guinness and go to mass every Sunday.”

Suddenly, the clouds part and the sun shines on an empty parking spot. Without hesitation, the Irishman says: “Never mind, I found one!”

Taking Out An Advert

“Is that the Ballycashel Echo?” asks Mick.

“How much would it be to put an ad in your paper?”

“Five pounds an inch,” a woman replies. “Why? What are you selling?”

“A ten-foot ladder,” said Mick before slamming the phone down.

An Irishman goes into a bar in America and orders three whiskeys. The barman asks: “Would it be better for if I put all three shots in one glass?”

The Irishman replies: “No! I have two other brothers back at home, so every time I come into a pub, I order a shot for them both.”

The barman asks: “Did something happen one of your brothers?” “Oh no,” replies the Irishman. “I just decided to quit drinking!”

Gerry Connors walked his dog through the village every day.

One day Mr Connors is on his walk without the dog.

His pal Billy sees him and asks: “Where is your dog?” Mr Murphy answers: “I had to have him put down.” “Was he mad,” asks Billy.

Dr O’Mahony tells his patient: “I have bad news and worse news, John.”

The doctor replies: “You only have 24 hours to live.”

“That’s terrible,” says the patient. “How can the news possibly be worse?”

Dr O’Mahony replies: “I’ve been trying to contact you since yesterday.”

Two Irishmen were working in the public works department. One would dig a hole and the other would follow behind him and fill the hole in.

After a while, one amazed onlooker said: “Why do you dig a hole, only to have your partner follow behind and fill it up again?”

The hole digger wiped his brow and sighed, “Well, I suppose it probably looks odd because we’re normally a three-person team. But today the lad who plants the trees called in sick.”