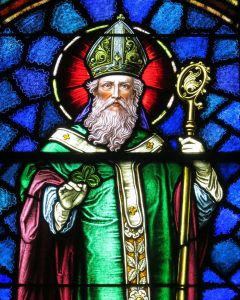 The image of Saint Patrick most of us in Ireland grew up with, is that of an elderly bearded man wearing twentieth century vestments.  He had a bishop’s mitre on his head and crozier in his hand.  This image which emerged over time is an interpretation that is very distant from what the real Patrick was like.  For many Saint Patrick lies somewhere between legend and leprechauns!  His feast is associated with green outfits, parades and provides a little respite from Lenten sacrifice.  He is associated with Ireland but not Irish by birth.  His story is one of slavery, suffering, conversion, and mission.  The Patrick we meet in his Confessio is a humble person who was no stranger to struggle.  Initially he was not a person of faith, but he was open to the Transcendent that led him to dedicate his energy to a life of service even in the midst of strong opposition and betrayal.

Patrick is open about his homesickness while in Ireland but realises that it is “Christ the Lord, who told me to come here to be with these people for the rest of my life.“ (C 43).  His strong relationship with God enabled him to carry out his mission in the face of all sorts of difficulties.  As he tells us himself:

“I bore insults from unbelievers, so that I would hear the hatred directed at me for travelling here. I bore many persecutions, even chains, so that I could give up my freeborn state for the sake of others. If I be worthy, I am ready even to give up my life most willingly here and now for his name. It is there that I wish to spend my life until I die, if the Lord should grant it to me.“ (C 37)

The evidence is clear that Patrick was first and foremost a person of faith.  He went about his mission of sharing the Christian message in a creative way.  This approach caught the imagination of the Irish as they immersed themselves in the faith.  There is much to be learned from Patrick’s approach for those of us who still treasure the faith he brought us.  Much has changed in our relationship with faith as a nation.  Many see the scandals in the Church as the cause of the collapse in this relationship, however, it is probably more accurate to say that the scandals accelerated an already weakening of faith that was happening long before the painful revelations.

All of this poses new challenges for the faith community.  In a sense these are similar to the challenges Patrick faced in his mission.  We too face many questions.  We might ask ourselves: Are we rooted in our relationship with Christ as Patrick was?  Are we witnesses of Christ’s message before others?  Are we willing to discern where the Spirit is calling us now?  Can we be creative in our approach and be bold enough to let go of some of the structures that served us in the past, but are no longer speaking to the reality of people’s lives today?  Can we truly open ourselves to the synodal approach of letting go of hierarchical structures to walk together along the path Christ is calling us?

Another significant factor in Patrick’s life was being forced to leave his homeland.  As a young man he was torn away from his family to live an isolated, lonely life in Ireland.  In recent weeks we have seen the heart-breaking scenes of families being forced apart because of the war in Ukraine.  So many have had to leave their homeland and their loved ones to seek safety from the ravages of terrible conflict.  The resilience and resistance of the Ukrainian people have inspired the world.  Their situation touches us deeply.  It has been uplifting to see how so many Irish people have pledged support and are willing to open the doors of their hearts and their homes to those who are seeking refuge.  We remember them, we support them, we pray for them.

We also remember all those who have had to leave their homeland and families for so many other complex reasons.  On Saint Patrick’s Day we remember all Irish people who had to leave home to find a new life in a different land.   Many are now advancing in age.  The recent Covid crisis left many of them alone and isolated.  Through the Irish Bishops’ Council for Emigrants, the work of serving the needs of Irish emigrants around the world continues.  This is undertaken by our pastoral centres in the United States and the UK, which provide a myriad of services to the most vulnerable members of the Irish emigrant community.  It also does so by providing grants to other like-minded organisations that provide support to vulnerable emigrants – from the aged and lonely to those with addiction and mental health problems.

None of this would be possible without the generous support given through the Annual Emigrant Collection.  I thank all those who continue to support this much needed cause and those who serve the needs of vulnerable Irish people abroad.  For decades, but most abundantly during the pandemic, Irish communities abroad have been reaching out in large and small ways to support the most vulnerable members of their local Irish emigrant communities. Such support includes the provision of food banks for undocumented Irish in the US as they couldn’t work and were unable to avail of social welfare supports.  Closer to home this support meant the resources could be invested in teaching Irish seniors in London how to use electronic tablets so as to stay connected during lockdown, which in turn eased the acute isolation and fear they experienced.  The generosity and prayerful support of the Irish at home is much appreciated and makes a big difference to people’s lives.  Our Government, through the Emigrant Support Programme overseen by the Department of Foreign Affairs, oversaw grants last year of some €13.6m significantly enhancing Irish people’s ability to support one another abroad at times of difficulty or distress.

The image of Patrick as an elderly, bearded, bishop with mitre and crozier has distanced him somewhat from the reality of our lives.  However, as we reflect more deeply on his life, his faith, his struggles, his loneliness at being away from home, a very real person emerges.  If we listen to Patrick we can hear a person who has much to say to us today – especially concerning the reality of how we engage with the various challenges of the contemporary world.