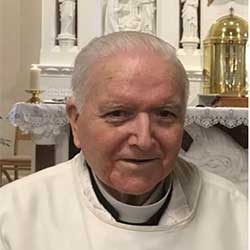 The death has occured this week of Rev. Fr. Roger McDonagh. Fr. Roger was appointed to the Parish of Keash in 1989, where he took up the role as curate in Culfadda.  Fr. Roger remained with us for four years until September 1993; when he moved to Kilmactigue Parish.

Fr. Roger was ordained in All Hallows college, Dublin in 1959.  He shortly thereafter took up the role as a Priest in the Archdiocese of Cardiff, Wales. He remained there until 1986, where he returned to Ireland, due to ill health.

Fr. Roger was a native of Gurteen and has now been laid to rest there.

Fr. Roger was highly thought of everywhere he went. A man known to regularly start out his sermons with a joke. Laughter and fun played a big part in Fr. Rogers life. In particular, he had a great way with children. Many Alter boys from our parish back when Fr. Roger was here, attended at his funeral, paying their last respects to Fr. Roger; recalling the kindness and fun that he had brought to their lives during his time in this parish.

We remember Fr. Roger at this time and thank him in prayer for his service to this parish. We pray that Fr. Roger will now enjoy the eternal rewards, from the good life that he led.

The following is an extract from a Personal reflection delivered at the Funeral Mass of Fr Roger McDonagh, prepared by him a short number of years ago.

‘Those who care about others, pick up many wounds.

Those wounds, may not of themselves be big wounds; only a multiplicity of little wounds, a host of scratches, wrinkles and belts. There can be a lot of invisible wounds.

The furrows left on the mind and heart, by hardship, worry and anxiety, disappointments, ingratitude and betrayal. Those wounds are not things to be ashamed of. Those wounds are badges of glory and honour. They are proof of our love. Jesus did not hide his wounds, which emphasised his love for us, for which we are healed.’ Fr Roger McDonagh

I love thee Jesus, my love above all things.

I repent with my whole heart for having offended thee.

Never permit me to separate myself from you again.

Grant that I may love thee always and then do with me, what thou wilt.