Thus says the LORD,
who opens a way in the sea
and a path in the mighty waters,
who leads out chariots and horsemen,
a powerful army,
till they lie prostrate together, never to rise,
snuffed out and quenched like a wick.
Remember not the events of the past,
the things of long ago consider not;
see, I am doing something new!
Now it springs forth, do you not perceive it?
In the desert I make a way,
in the wasteland, rivers.
Wild beasts honor me,
jackals and ostriches,
for I put water in the desert
and rivers in the wasteland
for my chosen people to drink,
the people whom I formed for myself,
that they might announce my praise.

Brothers and sisters:
I consider everything as a loss
because of the supreme

good of knowing Christ Jesus my Lord.
For his sake I have accepted the loss of all things
and I consider them so much rubbish,
that I may gain Christ and be found in him,
not having any righteousness of my own based on the law
but that which comes through faith in Christ,
the righteousness from God,
depending on faith to know him and the power of his resurrection
and the sharing of his sufferings by being conformed to his death,
if somehow I may attain the resurrection from the dead.

It is not that I have already taken hold of it
or have already attained perfect maturity,
but I continue my pursuit in hope that I may possess it,
since I have indeed been taken possession of by Christ Jesus.
Brothers and sisters, I for my part
do not consider myself to have taken possession.
Just one thing: forgetting what lies behind
but straining forward to what lies ahead,
I continue my pursuit toward the goal,
the prize of God’s upward calling, in Christ Jesus.

Verse before the Gospel

Even now, says the Lord,
return to me with your whole heart;
for I am gracious and merciful. 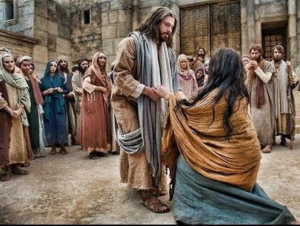 Jesus went to the Mount of Olives.
But early in the morning he arrived again in the temple area,
and all the people started coming to him,
and he sat down and taught them.
Then the scribes and the Pharisees brought a woman
who had been caught in adultery
and made her stand in the middle.
They said to him,
“Teacher, this woman was caught
in the very act of committing adultery.
Now in the law, Moses commanded us to stone such women.
So what do you say?”
They said this to test him,
so that they could have some charge to bring against him.
Jesus bent down and began to write on the ground with his finger.
But when they continued asking him,
he straightened up and said to them,
“Let the one among you who is without sin
be the first to throw a stone at her.”
Again he bent down and wrote on the ground.
And in response, they went away one by one,
beginning with the elders.
So he was left alone with the woman before him.
Then Jesus straightened up and said to her,
“Woman, where are they?
Has no one condemned you?”
She replied, “No one, sir.”
Then Jesus said, “Neither do I condemn you.
Go, and from now on do not sin any more.”

Let the one among you who is without sin be the first to throw a stone at her.”  Again he bent down and wrote on the ground.  And in response, they went away one by one, beginning with the elders.  John 8:7–9

This passage comes from the story of the woman caught in adultery when she is dragged before Jesus to see if He would support her stoning.  His response is perfect and, in the end, she is left alone to encounter the tender mercy of Jesus.

But there is a line in this passage that is easily overlooked.  It is the line that states, “…beginning with the elders.”  This reveals an interesting dynamic within human communities.  Generally speaking, those who are younger tend to lack the wisdom and experience that comes with age.  Though the young may find it hard to admit, those who have lived a long life have a unique and broad picture of life.  This enables them to be far more prudent in their decisions and judgments, especially when it comes to the more intense situations in life.

In this story, the woman is brought before Jesus with a harsh judgment.  Emotions are high and these emotions clearly cloud the rational thinking of those who are ready to stone her.  Jesus cuts through this irrationality by a profound statement.  “Let the one among you who is without sin be the first to throw a stone at her.”  Perhaps, at first, those who were younger or more emotional did not allow the words of Jesus to sink in.  They probably stood there with stones in hand waiting to start throwing.  But then the elders began to walk away.  This is age and wisdom at work.  They were less controlled by the emotion of the situation and were immediately aware of the wisdom of the words spoken by our Lord.  As a result, the others followed.

Reflect, today, upon the wisdom that comes with age.  If you are older, reflect upon your responsibility to help guide the younger generation with clarity, firmness and love.  If you are younger, do not neglect to rely upon the wisdom of the older generation.  Though age is not a perfect guarantee of wisdom, it may be a far more significant factor than you realize.  Be open to your elders, show them respect, and learn from the experiences they have had in life.

Prayer for the young: Lord, give me a true respect for my elders.  I thank you for their wisdom stemming from the many experiences they have had in life.  May I be open to their counsel and be guided by their gentle hand.

Prayer for the elder: Lord, I thank You for my life and for the many experiences I have had.  I thank You for teaching me through my hardships and struggles, and I thank You for the joys and loves that I have encountered in life.  Continue to pour forth Your wisdom upon me so that I may help guide Your children.  May I always seek to set a good example and lead them according to Your Heart.  Jesus, I trust in You.

Exposition of the Blessed Sacrament
Scroll to top